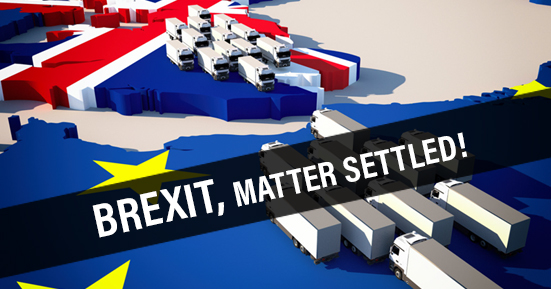 “It is settled,” Minister Michael Gove, number two of the British government, said last Friday, effectively closing the door to any further discussion on the possibility of an extension to the transition period beyond January 1st, 2021. “This brings clarity and certainty for companies and allows them to prepare,'' he insisted during a television interview. And for sceptics who may still doubt the determination of Boris Johnson’s government, Mr. Frost, Britain’s chief negotiator said to British MEPs: "Even if the EU demands it, we will refuse it."

So, it’s settled, even if the two parties deemed the last rounds of negotiations disappointing and without progress, and there are no less than 700 bilateral agreements to be negotiated before October 31st, given the deadlines for ratification by the United Kingdom and the 27 Member States involved. The working sessions will intensify and become weekly, including in July and from mid-August, in addition to the negotiation cycles initially planned. "We must now make progress on substance," warned Michel Barnier.

“A pragmatic and flexible approach” to Brexit from January 1st, 2021, according to a British government source

As soon as it leaves the European Union on January 1st, the United Kingdom plans to introduce gradual customs controls, so as not to penalise British companies already affected by the coronavirus crisis. A number of stages have been envisaged for the imports of goods from the EU up to July 1st. For the time being, Brussels has not promise reciprocity, and it is still expected that goods exported from the United Kingdom to the EU will be subject to declarations and controls, as is the case for goods imported to the EU from any third country.

In the first half of the year, British companies buying products from the EU (excluding controlled goods such as alcohol and tobacco) will have to keep a record of their imports but will have six months to declare them to customs. They may also benefit from the deferral of any duty payments until the goods are actually declared. Alcohols and tobacco imported from the EU will be subject to controls. Physical controls will also be carried out on high risk live animals and plants, either at destination or in approved places. Safety and Security declarations will not be required at this stage. However in April, for all Products of Animal Origin (POAO) such as meat, pet food, honey, milk or egg products, as well as all for plants and plant products subject to specific regulations, pre-notification and health documentation will be required.

From July, full controls will be introduced for all types of goods imported into the UK. British importing companies will have to make declarations at the point of importation and pay relevant duties and taxes simultaneously. Sanitary and phytosanitary products will be subject to an increase in physical checks and sample-taking by UK Border Control Posts. In addition, full Safety and Security declarations will be mandatory.

The Republic of Ireland and Northern Ireland: the next step?

A specific committee has been set up to finalise the Protocol on a solution to the situation concerning the future relations between the Republic of Ireland (EU Member State) and Northern Ireland.

This Protocol, which should come into force on January 1st, includes the following sensitive points:

Only in these conditions can peace and stability between all communities on the island of Ireland be assured, the Good Friday (Belfast) Agreement (10th April 1998) be upheld and the EU Single Market be preserved, according to European Commission Vice President, Maros Sefcovic.