Brexit – Fourth Round: London and Brussels drawn at 0-0 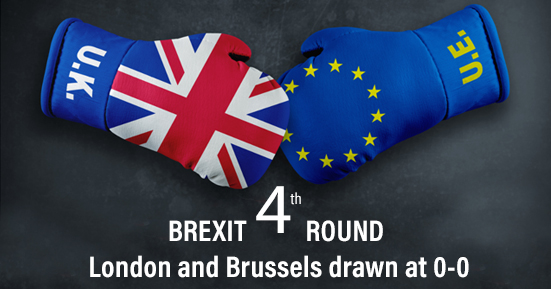 Brexit - Fourth Round: London and Brussels drawn at 0-0

The fourth round of Brexit negotiations between the European Union and the United Kingdom ended last Friday like the previous three: with a failure.

"There has been no significant progress," said Michel Barnier, after a new round of sterile discussions with the British negotiators. Whether it is on fishing rights, on the question of governance or on the ‘level playing field’, each party remained camped on its positions. However, "on all these points, we ask for nothing other than for the Political Declaration to be respected," Michel Barnier declared.

December 31st is looming and without any compromise, it is the World Trade Organisation rules and its customs duties that will apply, while Boris Johnson continues to refuse to seek an extension of the transition period. "He seems to be incorporating the scenario of a no deal," said Aurélien Antoine, director of the Brexit Observatory. Such a situation means that, if there is no extension of the transition period, an agreement on a legal text must be reached by October 31st at the latest, that is in just under 5 months.

However, everything is still possible since a high-level meeting, agreed in the Political Declaration, to take stock of the negotiations must be planned before the end of June. Nevertheless, Michel Barnier concluded his speech at the end of this fourth round of negotiations by opening a door to the hope for a positive outcome: "... and if we maintain our mutual respect, our serenity and our determination, I have no doubt that, during the summer or at the latest at the beginning of autumn, we will find common ground between the United Kingdom and the European Union. And finally, that we will find an agreement on our partnership for the future."